If one of these questions tortures your mind, don’t worry! Here we will summarize everything there is to know about these Akatsuki ring fingers so that they won’t hold any more secrets for you!

Sounds good? Then let’s find out together what do all the Akatsuki Rings mean !

In total, there are 10 different Akatsuki members rings, each one with its own symbol, it’s own color and it’s own position to wear on the hand. 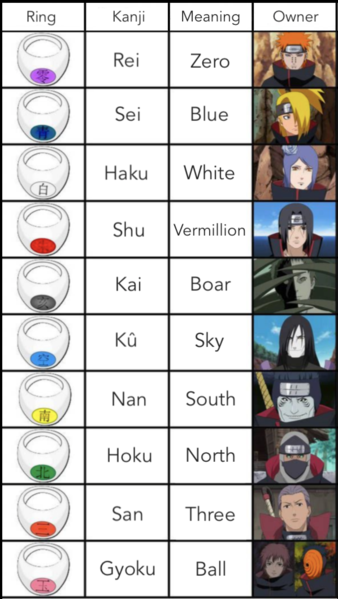 Each one of these divinities is represented in a different way and can be related to the different members of the Akatsuki except the chief; indeed, his kanji is unrelated to these Chinese gods as it is translated as “REI”. This term is ambivalent: on one side it can mean “spirit” and on the other side, it is also defined by the number zero.

Itachi’s ring is red with the Japanese kanji 朱 (lit. “Shu”) which means “Vermillon” in English. This Itachi Akatsuki Ring must be worn on the right ring finger.

Itachi joined the Akatsuki and received his ring from the hand of Tobi after he helped him kill all members of his clan. Itachi’s first partner was Jūzō Biwa, jōnin from Kirigakure and a member of the Seven Ninja Swordsmen of the Mist.

Pain’s Akatsuki ring is blue or yellow with the Japanese kanji 零 (lit. “Rei”) which means “Zero” in English. Also, Pain wears his ring on the right thumb.

Pain (Pein) was the leader of the Akatsuki clan and was in fact Yahiko’s dead body controlled at distance by Nagato. Pein is also one of the Six pains that Nagato controls with his Rinnegan.

Sasori’s ring is purple with the Japanese kanji 玉 (lit. “Gyoku”) which means “jewel” and “ball” in English. The right place to wear the Sasori Akatsuki ring is on the left thumb.

Deidara’s Ring is blue with the Japanese Kanji 青 (lit. “ao” and “shō”) which means “Blue” and “Green” in English and must be worn on the right index finger.

Deidara was a Missing-nin from Iwagakure (Village Hidden in the stone) and has been recruited by Itachi and Kisame after he almost blew himself because of Itachi’s Genjutsu.

Kisame’s ring is yellow with the Japanese kanji 南 (lit. “Nan”) which means “south” in English. You must wear the Kisame Akatsuki ring on the left ring finger.

Konan’s ring is white where is inscribed the Japanese kanji 白 (lit. “Byaku”) which means “white” in English. Konan Akatsuki ring is originally worn on the right middle finger.

Kakuzu’s ring is blue with the Japanese kanji 北 (lit. “Hoku”) which means “north” in English. Kakuzu Akatsuki ring used to be worn by his owner on the left middle finger.

Hidan’s ring is green with the Japanese kanji 三 (lit. “San”) which means “three” in English. To wear a Hidan Akatsuki ring properly, she must be on the left index finger.

Orochimaru’s ring is red with the Japanese kanji 空 (lit. “Kū”) which means “sky” and “void” in English. The powerful Sanin used to wear his Orochimaru Akatsuki ring on the left little finger.

Zetsu’s ring can be yellow or red and has the Japanese kanji 亥 (lit. “Gai”) which means “boar” in English. Zetsu used to wear his ring on his right little finger.

Tobi’s Ring is purple with the Japanese kanji 玉 (lit. “Gyoku”) which means “jewel” and “ball” in English. Tobi Akatsuki ring must be worn on the left thumb.

Tobi was the hidden true leader of the Akatsuki. He’s, in fact, Obito Uchiha who survived and followed Madara’s plan to capture all the Nine-Tailed Beasts. Tobi joined the Akatsuki after Sasori was killed by Sakura and Chiyo and got Sasori’s ring back from his dead corpse.

Here we are, you now know everything there is to know about the famous Akatsuki’s rings. We really hope that this article has pleased you because we surely did love writing it!

And if you want to have an idea of who’s the most powerful member of the Akatsuki clan, we did write an article on the Top 11 strongest Akatsuki members. So don’t forget to check it out, you may be surprised by who is number 1!